Tracy Hyde, title character in Melody, which was in the early weeks of filming fifty years ago when she turned 11, is 61 today.

This post started as a test post because when I came here, considering posting the birthday, I noticed no pics were showing in existing posts. I tested with the below from last year’s birthday post, made at a time I was obsessive about the film. I discovered that in using relative references to pictures, it was now requiring a leading / and no longer understood the img URL without one. 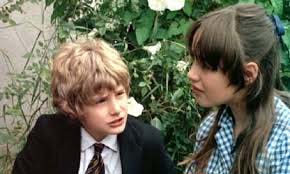 This is a big favorite of mine. It’s one of those happy songs like Mr. Blue Sky. I’ve also been told it unexpectedly difficult in Rock Band on the Xbox.

Besides that I just love it, the song actually has two modest associations with people. One is my late stepsister, by dint of her having been a big fan of Katrina and the Waves and gone to one of their concerts before I was ever familiar with this song. The other is Sarah, my biggest college crush. That has to do with the lyrics:

Now every time I go for the mailbox, gotta hold myself down
‘Cause I just can’t wait ’til you write me you’re coming around

I took a semester off from college along the way and spent six weeks living in Florida with my friend Frank and his first wife. It would have been longer, but Frank abruptly decided he just hated it That Much and was Done Down There. So they moved to New Hampshire and I moved back to Massachusetts, to my brother’s house, where I lived for the last bit of college plus about six months.

While I was there, I wrote a lot of letters. This included some rather lengthy ones to Sarah, even though I had already blown it with her, if not beyond all hope of rescue. Yep, before there was blogging, there were letters. I’d originally gotten in the habit of corresponding with Frank when he was in college, then particularly after he moved to Florida. I told her some of my aspirations and told her how I’d actually felt about her, which had been pretty obvious at the point when we were standing on a sidewalk at the college and it was exactly when any normal guy would have asked her out but I lamely backed off because I had no idea what to say and froze from anxiety. It was her birthday, October 6, or right near it, and I had given her a clever, complementary card.

The Florida thing was later. Then the next fall, going to her dorm room, where I have no idea what I would have said to her or what the reception would have been had she been around, she had left a note on a whiteboard on her door that she was “checking out the mail factor.” I don’t remember ever actually talking to her after I came back. After she wasn’t there then, I think I let embarrassment overcome any urge to try again. Ugh.

I wasn’t planning to talk about her so much here. This was supposed to be a post in which I put the song and spoke of it, with brief mentions of the two associated people. There are a minimum of two other Sarah songs without my even having to… no, a minimum of four… think about it. That calls for its own post. Even with my late stepsister there are at least three other songs and, by extension with one of them, an entire band, which I also associate with Frank to some degree. So yeah, I’ll wait. but I wanted to embed the video of Katrina and the Waves before I am done here:

I had worked out Melody timeline details a while back, but hadn’t given much thought to the times of day when things happened. I realized last night that we have a definitive time when the kids are released from school for the day. 3:30 PM. Or not long before 3:30, allowing time for Daniel and Ornshaw to get to their 3:30 punishment.

The other time reference I can think of is when Daniel and Ornshaw are out on the town after school, and a time check reveals it to be 5:10 PM, leaving Ornshaw fretting about needing to get home. Daniel gets a taxi and after a ride and some discussion, where Ornshaw explains why he was trying to get home, he heads home. He’s going to make his grandfather’s dinner. The discussion includes Daniel inviting him to tea and then they could go to a movie. So 5:10 plus a cab ride and change, and Daniel is just then contemplating it being tea time. Google tells me tea time is typically between 3:00 and 5:00.

So the day Daniel and Melody get together after school, after the punishment and drawing Daniel away from Ornshaw, ends with tea at her house. If we suppose it’s 3:45 when they are walking out of the school, that can give us an idea how long that interlude might have been. They walk and scamper at some length before sitting and talking and sharing an apple. Convenient symbolism, the apple. Both for growing up and to tie in to the song lyrics of First of May. We do see the sun is well into afternoon as they are arriving in the overgrown cemetery, arguably matching what might be near 4 PM. It’s good when you see them get filming details like that right, since things can get filmed in pieces across hours, days, and weeks.

Afterward they walk to her house and she insists he join them for tea, which is already in progress without her. Clearly nobody was concerned that she was not yet home, suggesting that it’s routine for her to stay late at school or to be free range for an extended time after school. The difference is showing up with a boyfriend. So what is it, 5:00 or so? I found it interesting what they seemed to be eating, which was more like lunch or supper, to me, than how I might picture tea.

Continuing this the next day, I have looked up the concept of tea and of meals in the UK. It turns out that tea can range from the image I have of high tea in the after noon to the actual evening meal I’d generally call supper. There might be tea at, say, 5:00 and then a small supper at, say, 8:00, or tea might actually be supper. None of which affects much the question of what time the Perkins family is having tea that day.

The scene where The ladies of the Perkins family are eating something for supper later in the evening on a previous day would suggest that they do have both tea and supper. It might depend to some degree on whether her father is home, since he seems to work long and erratic hours, even when he’s not in the pubs. Makes sense, if he’s a truck driver as I saw online, even though if it ever said in the movie I missed it. Just earlier I saw that Ornshaw’s first name, Tom, is said in the film, but it’s easy to miss. I sure did, multiple times. Now I’ll have to listen for it.

What else can I say about the time of day questions or answers in the movie? If school gets out close to 3;30 PM, that is the time when the elementary school gets out here. In our case, that is up through fifth grade, or sixth year. Classes actually start about 8:50 AM for elementary, with buses picking kids up about 8:10, give or take a bit. Kids who walk aren’t supposed to arrive there before 8:30 or so. Obviously it’s neither the US nor the present day, so who knows. It is also not the equivalent of elementary so much as middle/high school, where they are the youngest kids, in sixth year. That you see limited numbers of older kids is an artifact of it being a film and what’s needed to make it look close enough, as far as employing extras. But then, so could things like what time school lets out. Here the middle school starts classes nearly an hour before elementary, and high school even earlier.

Finally, if I can even remember my original point, I think what I set out to note was what the clues about time of day tells us about when things happen and who is expected where when. Melody is nominally expected home about 5:00 or so for tea, is free range before then, and they don’t panic if she doesn’t get home even then. Daniel probably has a similar thing going on, based only on his invitation for Ornshaw to have tea when it is already approaching 5:30. It’s possible tea is sometimes the evening meal for them, but at least sometimes they may eat again later instead or in addition. That gives the kids perhaps an hour and a half or so after school before tea.

Tea is also implied as happening sometime after the dance, but that’s on a Saturday and we don’t really know what time of day it was. Melody sits at her desk/makeup table, still in her pink dress after the dance, messing with makeup until her mother calls her to tea and says the kippers will be cold, taking Melody out of her reverie. I had always interpreted that scene as being in the bathroom, but having caught the bedroom Melody goes in earlier as if it’s hers, even though it looks like it could belong to an adult from what little we see, we see that table and mirror, exactly as in the makeup scene.

With all the gaps in telling the story, there’s a lot of inference and filling in we’re left to do ourselves. Which works, but can leave you wondering well how, when, what if, was that enough time, and such.

On this day nine years ago, we were on our way from Fresno to Las Vegas, arriving late in the afternoon at the Luxor. After checking in, we searched for the place where you pay the government for the right to be married. And searched. Eventually, we found it. A clever sales guy outside snagged our business for the Las Vegas Wedding Chapel. No idea where we’d have ended up, left to our own devices. That worked out, and we rewarded him for the good sense to patrol the opposite side of the street from the mob of other chapel sales people.

And so we got married, as originally planned, sight unseen, we’d hit it off that well long distance. Is friendship the best basis for marriage? Does agreeing on most things supply longevity that might not be there if it were mainly about an overheated attraction? Perhaps. We each had some second thoughts, even then, and we’ve not been problem-free. Yet we don’t seem to be going anywhere, and non-traditional though we may sometimes be, the kids do not appear to be doomed to grow up in a sundered household, as I and so many did. Have the rocky parts ultimately strengthened us? Arguably so.

All told, I can’t imagine my life alone, or with that hypothetical wasn’t-gonna-happen someone else. Or without the three kids. These specific kids, born of this particular mother. I can regret my age and timing, and ponder mightabeens, but wow. Just wow.

Time travel to the post I wrote after my return home, five days later, apparently my first substantive post following the wedding.