On this day in the Melody universe, Friday, June 5, 1970, nothing we saw on screen happened. Or the cafeteria scene happened, and nothing happened the previous day. This isn’t an exact science, unless you are Alan Parker and have a clear memory of the intent, despite almost 50 years having passed.

However, there was a painting scene reportedly filmed but left out. I’d like to think that that happened on the otherwise empty day. They were in art class, and Daniel was noted to be really good at painting. Presumably someone already knew that, with respect to the intro part of the film when he wanted to try painting something new and had a girly magazine a boy at school had given him so he’d no what a nude looked like.  However, we could take that to be from his prior school. Or he could have gotten it at this school but mostly he’d kept a low profile in whatever brief time he’d been there before the school holiday in late May.

Besides what I’ve seen about it, there’s one picture floating around, of Ornshaw with a paintbrush, looking crazed. It’s not high resolution and isn’t easy to tell from the background, but I’ve concluded it’s at school. My initial perception was that he’d visited Daniel’s house and it was in Daniel’s room. Could also be that. I’ll post the picture here. 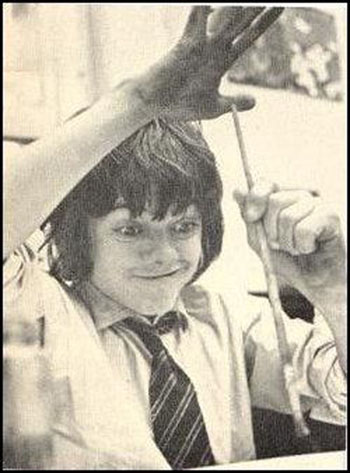